Welcome dear brothers and sisters in consecrated life to this year’s special Mass to celebrate the Year for Consecrated Life.

I acknowledge the presence of Bishop Terry Brady, concelebrating clergy, Sr Maria Casey RSJ, Vicar for Religious Life, Episcopal Vicars Fr Michael McLean and Fr Paul Monkerud, Dean of the Cathedral Fr Paul Hilder, Leaders of Congregations and Religious Orders, leaders and representatives of Archdiocesan agencies, parishioners and friends from the Archdiocese of Sydney and beyond!

Today we also acknowledge the leaders and members of congregations who have special events or anniversaries this year: 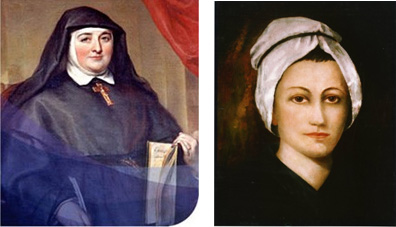 Thank you for all the gifts and charisms you bring to the Archdiocese of Sydney. May God multiply the fruits of your works but also bless you in your sacred tasks as Consecrated men and women, bringing Easter light to Sydney!

There were three brothers – a Franciscan, a Dominican and a Jesuit – who signed up for service as chaplains in the Great War… I know this sounds like the beginning of a joke, one in which the Jesuit will inevitably come out on top. But it is the true story of Francis Devas SJ, born into an English Catholic family of distinction in 1877, who as a young Jesuit taught at Stonyhurst and other schools before signing up with his brothers. We Australians tend to remember the 10,000 ANZACs who fought and died in the First World War rather more than the 53,000 British and French troops who died on one side of the Anzac campaign and a similar number of Ottoman Turks who died on the other. But on the eve of the first ANZAC Day the young Fr Francis Devas was posted with the 29th Division as chaplain in Gallipoli. In a fortnight’s time, we will commemorate the 100th anniversary of that day when so many young Aussies went to fight for King and Empire and so provided a central foundation to our nation’s self-understanding.

http://www.patheos.com/blogs/mcnamarasblog/2011/04/a-jesuit-writes-from-gallipoli-1915.html
Fr Francis wrote a letter from Gallipoli, which an English Jesuit magazine published in January 1916.  He spoke of offering Mass on altars constructed of ammunition boxes, a board on trestles, a packing case, or a rock-shelf along the cliff-face. Troops nearby often look on in wonder at the green-vested priest, his hands outstretched when offering up the Sacrifice of the Mass “for the sake of men in dusty khaki breeches and torn shirts, whose own lives of body and of soul are hourly in jeopardy”. He wrote affectionately of the soldiers who assisted at his Masses, many of them Irish, some from Lancashire, others “from all parts” – perhaps Aussies amongst them. They spent hours waiting for their turn for confession which he said revealed “something of the beauty of their souls”.

For these men, there was no longer any Sunday because only the Padre and the generals kept track of time; for the men time was blurred and “above all there is no tomorrow!” This gave them a sense of urgency, an eschatological horizon: “For the close neighborhood of death has made us all much as were the early Christians with their expectation of the speedy ending of the world.” And among it all persists the Church; this religious priest, he wrote, because sent by a bishop in communion with the Bishop of Rome was a “channel” through which the “visible graces of God” were poured. Christ was with them in battle, in his pastoral care and especially in his sacraments, comforting and strengthening them “in the horror of the darkness, with the awful thunder of war in [their] ears”. 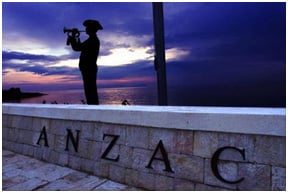 Today, so close to the centenary of the Anzac landing at Gallipoli, the service of that religious priest serves as a healthy reminder of our own calling as men and women consecrated to God, as members of orders and societies, congregations and institutes, hermits and consecrated virgins, to remain faithful to our charisms and to serve others in need, especially those at the ‘battlefront’ of secularising Sydney, and those wounded, one way or another, by modernity or by more perennial ills. This Year of Consecrated Life, announced by the Holy Father, is a space in which the entire Church can acknowledge the wonderful gift that those in consecrated life offer to the Church.  It is an opportunity for those of us who are consecrated to God to look backwards in appreciation and forwards in hope, and consider how we might live our charisms in the present better, more passionately, more effectively, for the sake of Christ and the Church.

Francis Devas SJ survived the war both at Gallipoli and on the Western front, was decorated for bravery and went on to be a  popular preacher and author of several books until his death in 1951. Through the Church’s history, inspired women and men have responded to God’s call and their particular historical moment and created or sustained forms of life that offer their members and those they influence paths to sanctity. Today is my opportunity, on behalf of the Archdiocese of Sydney, to recognize and thank the 910 Sisters, 220 Brothers, 227 Religious Priests, several Members of new emerging Forms of Consecrated Life, 1 Consecrated Virgin and 1 female Hermit who are currently responding in that way within the territory of our Archdiocese. These particular inspirations and their concrete expression in individuals, communities and works of prayer and charity, enormously enrich the Church and so the world.  Indeed, it was religious, as Pope Francis observes, who have so often written not with pens but with prayer and action the history of Christianity.

Now, like many other moments in history, is a historical moment of great challenges for the Church and so for her consecrated members. Pope Francis lists decreasing vocations and aging members, the enduring economic fallout of the GFC, the stresses of globalisation, the threats of moral and cultural relativism, the experiences of isolation and social irrelevance.  Many thirst for the Gospel whether they realize it or not: despairing individuals, struggling families, orphaned children, young adults without hope, abandoned elderly and sick, the materially wealthy but spiritually poor.  But they will only receive the Gospel, only drink deeply from its streams that special water that quenches deep thirsts, if they see that Gospel lived radically and authentically by us religious.

Such challenges are great opportunities. That Easter Day and season we celebrate at this time offers contemporary humanity a new horizon of hope and a new confidence in the power of God’s love, just as it did to the first Christians.  Our first reading stars Peter and John, two intimates of Christ who had heard Him speak of the Resurrection, had seen Him agonizing in the Garden but also transfigured on the mountain, but had not understood. Indeed by Holy Thursday night, by Good Friday, they thought it was all over. And naturally enough they were afraid of the authorities that had brought Christ and the Christ thing to its tragic conclusion. Yet here they are, post-Resurrection, filled with the Spirit and fearless in proclaiming the Word. They simply cannot bottle up inside and keep to themselves the joy of knowing the Risen Christ: “We cannot promise to stop proclaiming what we have seen and heard,” they say (Acts 4:13-21), and they are not being defiant, simply guileless, enthusiastic, love-struck. The Lord’s mandate is their own instinct: “Go out to the whole world; proclaim the Good News to all creation.” (Mk 16:9-15)

It is precisely this Gospel verse that Pope Francis says particularly applies to the whole Church at this time in history. Even more, he thinks it applies at this historical moment to us religious, empowered and commissioned as we are to go out to serve those on “the existential peripheries”. He tells those of us in consecrated life, “you will find life by giving life, hope by giving hope, love by giving love”.  How? By being prophets who “wake up the world”, by radiating “the joy and beauty of living the Gospel”, by “following Christ to the full”, so prophetically and fully and joyfully and beautifully that people cannot help but be attracted.  Like Fr Francis Devas was to those men in fear of mortal danger at Gallipoli, we are to “have the courage to be present in the midst of conflict and tension, as a credible sign of the presence of the Spirit who inspires in human hearts a passion for all to be one”.