Welcome to you all to this morning’s Solemn Mass at St Mary’s Cathedral. Today we celebrate the annual Mass for Pregnant Mothers; after communion I will bless them and the babies growing within them. It is chance for the Archdiocese to give thanks to God for the blessing of children, to give thanks to their mothers for bearing them, and to support family life at a time when our community is not always as supportive as it should be.

Above all I welcome all expectant mothers and their families!

You’ve got a stark choice to make, says Joshua, the leader of the Israelites after the death of Moses, to the people this morning: worship the one true God, the God of Abraham, the One who brought you out of Egypt to the Promised Land, or abandon Him and follow the various false gods available in the market of ideas (Jos 24:1-2, 15-18). Joshua knew, as we do, that there are many idols out there, each appealing in its own way, and that people of all kinds are devotees. A particularly popular one today is the idolisation of self: taking endless photos of oneself, improving them and publishing them on the net for the adulation of the crowd; organising the world and the people around us for our own comfort and convenience; pursuing self before all else. If vanity is the fastest growing vice today, narcissism is the fastest growing personality disorder.

The self-idolisation of modernity can combine with some rather troubling attitudes to children. As fertility rates in the West plummet children have become for many couples an optional extra after doing all the ‘really important’ things by way of career advancement, real estate and travel. If babies are welcomed at all, it is often to fulfil adult desires and we have various tests and scans to ensure they measure up – or else. Recently the American media have been up in arms at the hunting of Cecil the Lion – and fair enough – but there has been relative silence about the revelations that abortion provider Planned Parenthood regularly traffics foetal body-parts.[1] American commentator Elizabeth Scalia has written of the unwelcome that mothers sometimes cop for bringing children to shops, entertainments, doctor’s surgeries, even churches. She quotes another commentator who complained of those who bring their ‘squealing offspring’ to brunch and crowd the footpath. More troubling, Scalia thinks, is the puzzled awe on some people’s faces when they see babies, as if they are aberrant artefacts or sweet hallucinations worthy of passing smiles before returning to a child-free normality.[2]

Our pregnant mothers today are a counter-witness to this. Though they all have their own issues and none is perfect, mothers uniquely show that the pursuit of self is not all there is to life or even what is most fulfilling. By this Mass the Church in Sydney recognizes the dedication of women who bring new life into the world and the Christ-like self-sacrifice of the parents who care for those children thereafter. Pope Francis has critiqued the all-too-common attitudes to children that make them a population or ecological problem, or a threat to personal life-style, or a kind of project aimed at satisfying the needs of adults. No, he says, children are a gift![3] Not just because are they cute, not just for the joy they can bring, but precisely because they are so demanding: they demand our love and care. There’s no better strategy designed by nature to make adults really grow up, accept responsibility and compromise their comfort for the sake of another than a screaming baby! If babies are the future of Church and society, it is parents who must raise them as citizens and saints, and so we need those parents to be virtuous. 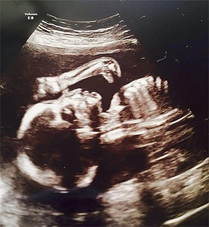 I was recently introduced to a popular internet site for funny ultrasound photos of unborn babies. One photo, of Leanne Sullivan from Liverpool and her unborn daughter, shows what seems to be a brontosaurus from Jurassic Park about to bite her baby; it is, in fact, the umbilical cord. In another, a child has an uncanny resemblance to Shrek the swamp-dwelling cartoon ogre. One scan records a baby banging his head against the uterine wall rather like Charlie Brown from Peanuts cartoons. Another poses like Rodin’s Thinker in a pensive mood with fist holding up his chin. There are photos of unborn babies flexing their muscles, high-fiving, giving the thumbs-up and waving to the camera. Sometimes the parents add a funny caption: in one scan a cat appears to be in the womb watching the baby and the father posts that they are expecting a feline surprise. The Daily Mirror recently posted a video of an unborn child clapping along to the song “If you’re happy and you know it, clap your hands”.[4] Who knows what our unborn babies will do after today’s blessing!

In today’s epistle St Paul proposes marriage as a way to understand Christ’s relationship to the Church (Eph 5:21-32). But for that analogy to work he has to make sure we understand marriage itself. As if he were addressing contemporary society, he reminds us that it is about a man and a woman, about a nuptial union that makes them one flesh. The mystery of this sacramental and one-flesh union of man and wife is of course what brings babies into the world and St Paul knows that Christ’s ‘nuptial’ union with the Church is what brings forth new Christians. That’s obvious you might say, but there were some then, and are plenty today, who are confused about babies. So, too, Paul insists, spouses and parents must compromise their own preferences for the sake of the other’s good; again, you might think that’s obvious, but our culture perhaps more than most could benefit from a gentle reminder. Our ultrasound images are full of life and humour, but also highlight the utter dependence of little ones on their mothers’ care. That’s so before birth; some would say they remain at least as dependent on their parents through infancy, childhood and an extended adolescence that these days lasts till about age 40! Then Mum can become child-minder for the next generation…

In our Gospel today, Christ concludes the Eucharistic discourse we’ve been hearing now for several weeks (Jn 6:60-69). He says His Word and sacraments are life giving, eternal life giving. As the Spirit of God ‘transubstantiates’ the elements of physical life into the reality of the supernatural life that is Christ, so parents must have an eye not just to the physical and emotional but also the spiritual nurture of their children. That includes the life of prayer and worship, of catechesis and witness. And so, dear mothers, the Church our mother joins with you, in praying for you and your child, and calls you to raise your child in the ways of God by praying with them and for them even now.

Thank you for choosing life, for serving life, for collaborating with the Author of Life! May God bless you and your little one all the days of your lives!