Words of Tribute and Thanks for Most Rev. Terence Brady, Auxiliary Bishop Emeritus of Sydney 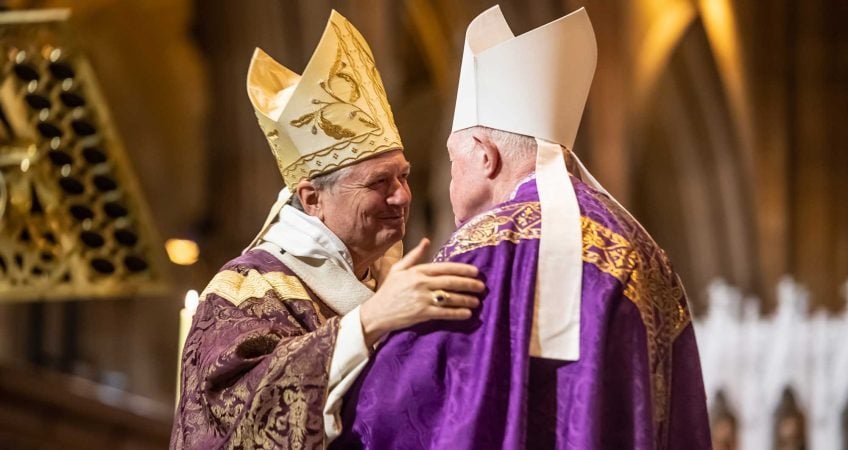 Earlier in the year at our Mass commemorating the 200th anniversary of the laying of the foundation stone of St Mary’s Cathedral, I spoke of the towering influence of some Irish pioneers of the early Church in Australia, the most prominent one going by the name of “Therry.” This Therry was by all accounts a man who saw Jesus in the poor and lowly, who dedicated himself to the destitute and dispirited, a fighter who sought to bring God’s tender love to the people of our city whatever the cost. The legacy of John Joseph Therry is inseparable from the history of the Church here in Sydney and his mortal remains lie in our crypt.

God, in his mysterious and gracious providence, sent another influential, Irish-infused Terry in the subsequent centuries: Terry Brady. Terry 2.0 was also a fighter. Born seven weeks premature, he had to fight even to survive birth! Experiencing a call to serve the poor from early on, he volunteered as a youth at a hostel for homeless men and never wavered from this vocation: he has been a regular at Matt Talbot and with the St Vincent de Paul Society, with ministries to the homeless, prisoners, the sick, refugees, the Indigenous… wherever he could meet those Pope Francis has tagged “the people on the peripheries of society who are at the very heart of the Church”.

After my first Easter as archbishop I asked the members of my curia how they had spent Easter. We were gobsmacked to hear Terry say, entirely matter-of-factly, that he’d spent Easter morning in a prison, celebrating Easter Mass again and again, because the guards would only allow groups of twenty at a time. After seven or so Masses for those allowed to attend, he then brought Holy Communion to the threshold of those in solitary confinement. He described one as most likely a very old brother in gaol for child sex offences, shuffling forward to receive the Body of Christ; others had committed other terrible crimes. This same concern to be the heart of Christ in the world led young Terry to enter the Missionaries of the Sacred Heart at Douglas Park, where he received the spiritual formation that ultimately sustained him in the diocesan priesthood.

Ordained in 1983, Fr Terry developed a deep affection for the ordinary faithful and their coming together in parishes. He ministered in Liverpool (1983), Strathfield (1987), Kingsgrove (1990), and Neutral Bay-Clifton Gardens-Mosman (2004)—in each of which he is warmly remembered. Even after being bishopped he begged me to be able to live in an ordinary parish and so he became a bishop-in-residence at Balmain-Rozelle (2015-16). He never renounced his second vocation to serving people in parishes: not only was he a favourite formal parish visitator, he regularly volunteered to say Masses in parishes, especially to add his mitre and words of encouragement to parish jubilees, installations of pastors and other celebrations, and he spoke up for parishes and their needs at every opportunity.

Indeed, Terry is famous for dropping in on priests as he passes by their presbyteries, just to see how they and their people are going. If the homeless shelter and the parish presbytery were his natural environments, Terry could be confident he’s never had to live in a bishop’s house! But in 2007 the God of Surprises and His vicar Pope Benedict gave Terry the shock of his life when he ‘elected’ him Auxiliary Bishop of Sydney. As always Terry said Yes to whatever God and His Church asked and on 16 November 2007 he was consecrated bishop with the Titular See of Talaptula. In that role he assisted Cardinal Pell as archbishop, alongside now-Archbishops Porteous, Comensoli and myself, and assisted me as archbishop alongside Bishops Randazzo, Umbers and Meagher.

I’ve joked in the past that the purpose of an auxiliary bishop is to be the person to whom the archbishop can offload as many duties as possible, while taking all the credit for anything they do well! Granted that Cardinal Pell and I did a fair bit of offloading, Terry was always one to have had his hands full in any case. He is a man who gives his ministry his all, and despite advancing years that excuse his sleeping through the more boring bits of some meetings, he manages to fulfil an extraordinary number of engagements in any particular day or week. I am not sure how many young people he would estimate he has confirmed in his years, but I guess it runs to tens of thousands. That might seem a mechanically repetitive thing, but as a bishop I can tell you that we come home from Confirmation elated with the joy and idealism of the young people, the hope and love of the families, and I dare suspect a bit of Holy Spirit that has stuck on its way through our hands!

Bishop Terry served this archdiocese on many boards and committees including the Charitable Works Fund Committee (2000), Catholic Mission (2001), the Council of Priests (2007), the College of Consultors (2007), the Priests Appointments Advisory Committee (2007), the Vietnamese Community Advisory Committee (2009), the Catholic Cemeteries Board (2011), the Archdiocesan Curia (2014), the Council of Deans (2015), the Homelessness Taskforce (2018), the Parish 2020 Committee (2015), the Year of Mercy Working Party (2014), and the Archdiocesan Plenary Council Working Party (2018). He served as Episcopal Vicar for the Western Region (2015), then for the Northern Region (2016), and as Episcopal Vicar for Health, Welfare and Social Justice (2016).

At different times he also served the national Church as chair or a member of the Bishops Commissions for Pastoral Life, for Health and Community Services, and for Social Justice, Mission and Service. He served on the national Catholic Councils of Social Services, Catholic Prisoners Pastoral Care, Disability, the Marriage and Family, Healthcare, Social Justice, Migrants and Refugees, and Caritas. I’m not sure how many other titles or jobs we’ve given him, but after so many committee meetings I think he’s done his penance for life!

When I was struck down with Guillain-Barré Syndrome and only gradually recovered over several months, I knew I could trust Terry—along with many other colleagues—to keep the wheels of the Archdiocese turning. At practically no notice, he had to take over some of my major liturgical and governing functions. He did so readily and generously. And on various occasions he has acted as Administrator. He has also been a quiet pastoral presence in the Polding Centre with all our staff.

So Terry 2.0 has had at least three vocations, to the poor, to the parish and to the diocese. In one way or another all three were his answers to the Lord’s challenge “When I was hungry, thirsty, lonely, naked, imprisoned what did you do for me? Truly, I say to you, as you did it to one of the least of these my brethren, you did it to me.” (Mt 25:31-46). And while physical poverty, hunger and incarceration are the primary cases of such neediness, Terry knows very well that spiritual hunger, emotional poverty and psychological entrapment are every bit as real and in need of Christ’s healing touch. The field hospital of the Church must be there for every kind of need.

After our Mass tonight the Christmas lights will be projected on our cathedral façade and I think this year may very well be our best, so I invite you to view them on your way to the supper in the hall, as a little extra way of celebrating four decades of selfless acts of pastoral care by Bishop Terry. Water features through the cycle, recollecting the blessing of water but respecting also those who lost their homes and livelihoods in this year’s floods. Bishop Terry challenges us to reach out to such as these in their need. As the first ‘Therry’ left an indelible mark on this city, so to have you, my brother. Thank you and God Bless you!

Welcome to St Mary’s Cathedral for our Mass of Thanksgiving for the ministry of the recently retired Auxiliary Bishop of Sydney, Terence Brady. When Pope Francis accepted Bishop Terry’s resignation after he had reached the retirement age of 75, many (including myself) experienced mixed emotions. He deserved a time on lesser duties to engage in ministries he would like to devote himself to, and even to slow down a bit and enjoy some leisure. But it also meant losing him as the great helper he has been all these years. Today, as we celebrate and give thanks to Almighty God for his faithful service as Auxiliary Bishop of Sydney, we also pay tribute to his many contributions as a priest, adding up to four decades of service. Following the Prayer after Communion, some formal words of thanks will be offered, including my own, as well as a response from Bishop Terry.

Concelebrating with me tonight are the eparchs of three oriental rites in Australia and Oceania: Eparch Robert Rabat of the Melkite Catholics; Eparch Bosco Puthur of the Syro-Malabars; and Eparch Amel Nona of the Chaldeans. Also: the Ordinary of the Ordinariate of the Southern Cross, Mons. Carl Reid; Auxiliary Bishops of Sydney, Richard Umbers and Danny Meagher; Auxiliary Bishop of Melbourne Tony Ireland; and the Bishop Emeritus of Wollongong, Peter Ingham. I also acknowledge the Vicar General, Vicars and Deans, together with many priests of the Archdiocese of Sydney and beyond.
I salute the many religious sisters and brothers representing their congregations, and many institutions and ministries of the Archdiocese of Sydney or the wider Church, including the Vice Chancellor of the University of Notre Dame Australia Prof. Francis Campbell, the Deputy Vice Chancellor of the Australian Catholic University Prof. Hayden Ramsay, several school principals and agency heads.

I especially welcome Bishop Terry’s sister Frances and brother-in-law Chris, as well as his many nieces and nephews, great-nieces and great-nephews, cousins, and extended family.

To everyone here on this special night of thanksgiving, a very warm welcome to you all!