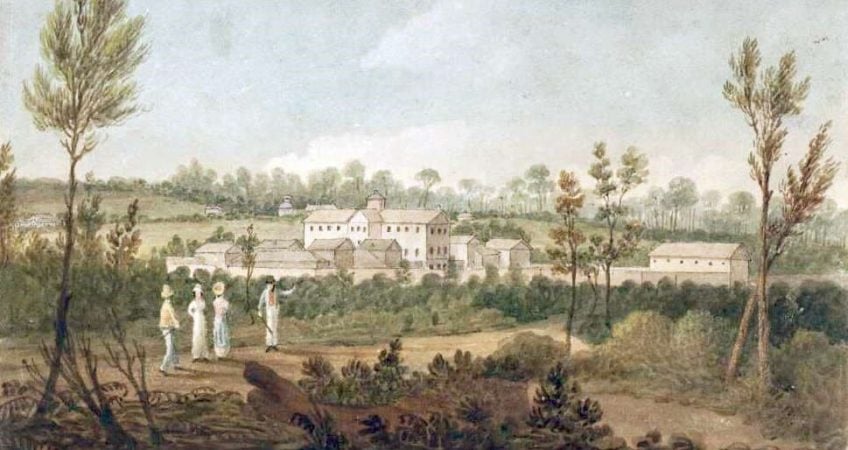 “God bless you ladies!” said the boatsmen who rowed the first sisters ashore to Sydney Cove on New Year’s Eve of 1838. Mother Mary John Cahill, Sisters Mary Francis de Sales O’Brien, Mary Baptist De Lacy and Mary Lawrence Cater, and the novice Sr Mary Xavier Williams must have had a lot of what used to be called ‘pluck’ – courage, a sense of adventure, inspiration and determination… – to volunteer to cross the world and establish the first convent of religious women in Australia. Awaiting them onshore were then-Bishop John Bede Polding, head of this emerging church in Australia, Attorney-General John Plunkett and former Attorney-General Roger Therry (a cousin of Sr Francis de Sales), representing the emerging civil society, as well as pupils of St Mary’s School, a symbol of that community’s future, and a large crowd of Catholics and Protestants, many of whom had never seen a nun before.

The next day a capacity congregation in St Mary’s Cathedral celebrated a Mass of Thanksgiving for the safe arrival of these five daughters of the visionary Mary Aitkenhead. The Vicar-General, William Ullathorne, who had recruited and accompanied them across the seas, and so gotten to know them, preached the sermon in which he compared he sisters to angels sent from heaven by the God of mercy and compassion to tend the miserable because He could not abide such misery even on earth.

And so their first task was to serve those considered the most degraded in the whole British empire: the convict women of the Female Factory in Parramatta, many of them prostitutes, with their illegitimate children. It was in such as these that these pioneer Sisters invested themselves in the hope of giving them improved health, a little education, some employable skill, the simple encouragement of knowing someone believed in them. It was said that prior to their arrival at the Female Factory “all was noise, ribaldry and obscene conversation”. But afterwards there reigned “the quiet of a well-ordered family. Not an oath nor curse nor brawling word is heard; and a general desire to frequent the Sacraments prevails”.[1] So inspiring were they that the sisters had to ward off prisoners trying to make Confession to them!

Around the same time the sisters also established a base in College Street near St Mary’s Cathedral, becoming what we would call today parish pastoral associates, visiting the poor and sick of the parish, convicts in prison or hospital, giving religious instruction in all six Sydney Catholic schools, conducting needlework classes during the day and adult ed in the evenings.

From these beginnings, the Religious Sisters of Charity spread North and South and expanded into healthcare, education, aged care, ministries to indigenous and remote Australians, to victims of addiction and mental illness, research and many kinds of welfare and pastoral care. Mary Aikenhead Ministries, St Vincent’s Health and Mary Aikenhead Education are now major players amongst the ministries of the Catholic Church in this country.

If that’s a little of the what that the RSCs have been for Australia and will be treasured in this heritage centre, how about the why? Were Mary Aikenhead and daughters adventurers and empire builders like the colonial authorities by whose leave they established themselves, or was there something else that drove them? Our Gospel text this morning (Jn 17:2-26) articulates something of the inspiration of their extraordinary mission:

This is the Caritas Christi that urged on Mary Aitkenhead, Mother John, and generations of brave and generous religious women and their associates ever since: an abiding faith, a future hope, and a uniting love that was so much more than a corporate mission statement or strategic plan, but could even inspire such things too. That people might touch, glimpse, experience something of the glory of God, the unity of the Father and the Son, the love of the Spirit, in their works, their institutions, their presence: for 180 years the sisters and their colleagues in this land have sought out the poorest of the poor, not just financially but intellectually, emotionally or spiritually; sought them out so as to raise them up to the dignity of an image of God beloved of Christ.

I have experienced that loving care directly myself. Three decades ago I began my association with the St Vincent’s Bioethics Centre, the hospital ethics committee, and Eastern Palliative Care in Melbourne. Since my return to Sydney I’ve been associated with the Plunkett Centre and lived on the site of the sisters’ first convent in Parramatta. Three and a half years ago, when I was seriously sick, they cared for me at St Vincent’s. And now my parents are in their care at St Vincent’s Bronte. That’s just one person, one family; how many thousands, indeed millions, have been touched in their lives by the Sisters and their colleagues these past 180 years?

This new Heritage Centre, with its living presentations and archives, is a worthy recognition of that history, those continuing apostolates, but above all the enduring inspiration, the why behind the what. It will invite more than nostalgia, healthy though it is to know and reverence our history. It will occasion reflection and new perspective, not just on the where we’ve been but also where we are going. It calls forth our esteem, gratitude and hope. During their time in Australia the Religious Sisters of Charity have braved many challenges, overcome many adversities, achieved many fruits, and also experienced the joys of a mission accomplished if also unending. They have had many companions in that mission whom they celebrate also today. My thanks to the sisters, the trustees and all those who have contributed vision, passion and resources to the establishment of this centre that with joy we bless today.