Letter from Rome to the people and pastors of Sydney 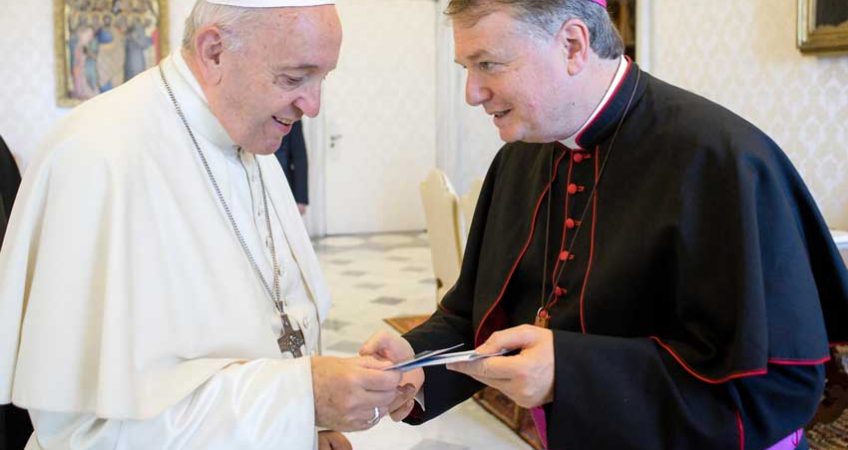 I write to you from Rome at the end of the Ad Limina Apostolorum pilgrimage of the Australian Bishops to the tombs of the apostles, to the Holy Father, and to the Vatican Departments.

We began with a retreat in a religious house outside Rome, an important time of reflection upon our own ministry as Bishops, of prayer for the Church in Australia in these challenging times, and of renewal of our faith and hope in Christ Jesus.

Our Ad Limina visit was framed by the Feast of Corpus Christi – where we reflected upon the hunger for the Eucharist in Australia, going back to colonial times – and the Feast of Sts Peter and Paul – when (today) we joined Sydney’s former auxiliary bishop, Peter Comensoli, as he received the pallium from Pope Francis as Metropolitan Archbishop of Melbourne.

On Monday I prayed for you all at the tomb of St Peter. After celebrating Mass together there, we went to meet Peter’ successor, Pope Francis, at the apostolic palace. It was a deeply moving and very encouraging meeting and underlined for me the importance of the Petrine ministry. The Holy Father clearly understood our situation in Australia, taught, advised, challenged and encouraged us. This encounter was a real moment of grace.

Each day the Bishops followed the same pattern of celebrating Mass together at one of the papal basilicas before or after our day of meetings. I had the privilege of leading our Mass at the Basilica of St Mary Major. At St Peter’s, St Paul’s, St Mary’s and yesterday at St John’s we prayed for the Church of Australia, for wisdom and courage for its leaders, and for fidelity and the joy of Christian life for its people.

Each day we had a series of meetings with the various Vatican departments: they are called ‘dicasteries’ but the spell-checker on my computer keeps trying to correct it to ‘dysenteries’!

The Congregation for Saints was very encouraging regarding the cause of Eileen O’Connor. The Diocesan phase is currently in process and the official opening of the Cause in Sydney will be scheduled for later this year. At several Congregations we received encouragement and helpful advice regarding the Plenary Council for Australia.

I led the bishops’ delegations to the Congregation for Catholic Education and the Congregation of the Doctrine of the Faith. At our meeting with Catholic Education I updated the officials about the unique Catholic education system we have in Australia, its achievements in early childhood, primary, secondary and tertiary education, as well as the present challenges. There was good discussion on a number of these issues, including various threats to the freedom of our schools to continue to enrol, employ and teach according to our Catholic approach.

At our meeting with the CDF, we discussed many important matters touching upon faith, morals and discipline, especially child safeguarding, threats to life and love such as the big push at present for euthanasia, and government intrusion into the sacramental life of the Church.

Overall, the Bishops of Australia had a very good experience of this ‘audit’ of Church life in our country, of the pilgrimage to the holy places, and of communion with the Pope and his collaborators. For all the negativity around the Church at present it gave us real cause for hope. We are grateful for your prayers for us and we have had you all in our thoughts and prayers throughout.

Meanwhile I’ve been following from afar the Israel Folau matter – which illustrates some of the concerns we discussed with the Pope and Vatican departments.

Much has been said and written about the Folau saga and no doubt there will be more to come. But it does seem to me that there has been a very heavy-handed targeting of Israel and Maria Folau for daring to express unfashionable religious views. In the background is a relentless campaign from some quarters to push religious beliefs and believers to the margins of society, and to confine faith to an ever-narrowing field of private life.

You don’t have to agree with all Mr Folau says or the way he says it to be troubled by the determination of some to destroy him and his family, and also to be concerned about what this means for freedom of speech and belief for ordinary Australians.

The Australia we all know and love has, for the most part, been good at giving people the space to believe different things, to express them in free speech, to try to persuade others of their beliefs, and to practice what they preach. But now we are seeing sporting organisations, airlines, websites, financial institutions and health insurers using their corporate power to narrow that space and punish those whose views they disapprove. No one should have to raise millions to vindicate their rights against such corporate power.

Matters pertaining to the freedom of religion will no doubt be on the agenda of state and federal parliaments in the coming months. They shouldn’t be reduced to the Folau saga. But it’s important we all keep informing ourselves about, praying and advocating for respect for religious freedom in Australia. With my prayers and blessings from the Eternal city,

Yours sincerely in Christ