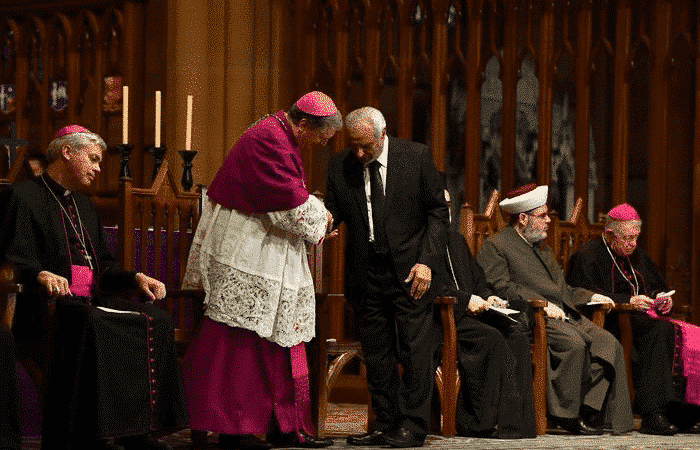 Welcome to the tenth Iftar breakfast hosted by the Catholic Archdiocese of Sydney.

It is with great joy that tonight I acknowledge our Muslim guests: His Eminence Dr. Ibrahim Abu Mohammed, Grand Mufti of Australia and President of the Council of Imams NSW; Mr Samier Dandan, President of the Lebanese Muslim Association; Mr Ahmet Polat, CEO of Affinity Intercultural Foundation; and other imams, sheikhs and representatives of the Muslim community.

From the Christian Churches, I welcome: His Grace Bishop Daniel of the Coptic Orthodox Bishop of Sydney; Fr. Kyrillos Zisis from the Greek Orthodox Church Australia; Bishop Michael Stead, Anglican Bishop of South Sydney; Rev. Simon Hansford, Moderator of the Uniting Church Synod; along with representatives of the Uniting Church, the Salvation Army, and other Christian confessions.

Representing First Australians I salute Ms. Lisa Buxton, from Aboriginal Catholic Ministry; with her I acknowledge the elders past and present of the Cadigal clan of the Eora nation, traditional custodians of the land on which we meet.

From civil society I acknowledge Hon. John Sidoti MP, NSW Minister for Multiculturalism, and other community leaders and faithful. It’s great to have you all in my home!

On 20 May 1932, a 34 year old American woman, Amelia Earhart, made history. She left Newfoundland, Canada, in a red Lockheed Vega 5B and, despite fierce storms and serious mechanical failures, she landed the next day in a cow pasture in Northern Ireland. When a farm hand asked, “Have you flown far?” Earhart replied, “Only from America”. This made her the first woman to fly solo across the Atlantic. Over the next few years she made many aviation records, until her disappearance in the Pacific in 1937. Emblazoned on the side of her plane were the words ‘Always think with your stick forward’ – in other words: get going, and maintain speed and direction, till you get to your destination.

I don’t know is Dr Mohammed, Rabbi Elton or any of our other religious leaders here tonight has a pilot’s licence. Some outback bishops in Australia do, as this is the only practicable way for them to visit their people. In Sydney, I sometimes dream about a helicopter when I’m parked in a traffic jam on one of Sydney’s motorways. But Amelia Earhart’s motto does speak to me about the importance of maintaining forward momentum, in our interfaith travels, as in other parts of our journey of faith.

Since the last Ramadan much as happened. Three tragic events that we cannot ignore were the Pittsburgh synagogue shooting during Shabbat prayers, in which eleven worshippers were killed and seven more people injured; the attacks on two Christchurch mosques during Friday Prayers, killing 51 people; and then the Easter Sunday attacks on three Christian churches and other venues in Sri Lanka, possibly in retaliation for the Christchurch killings, this time claiming 258 lives and injuring around 500 others. These three events, and other attacks upon people of faith occurring almost daily around the world, shake us, shock us, disgust us. But they must not deflect us from navigating our flightpath of friendship.

Indeed, as I said at the time of the Sri Lankan memorial: terrorists who attack mosques, synagogues and churches blaspheme the holy name of God whose image their victims bear and who never condones violence against the innocent. They desecrate the bodies they kill, the ceremonies they interrupt, the holy places they damage. They maim and traumatize the survivors, their families and communities. And they often add their own self-murder to the list of the atrocities that invite damnation.

When these three recent events took place, we all grieved, we were all anxious. We reacted, not vindictively but with messages of sympathy and ceremonies of remembrance. We retaliated, but with prayer rather than weapons. We demonstrated, but by gathering in friendship rather than rioting. There were interfaith gatherings in Sydney to commemorate those who had suffered, and to renew our commitment to each other and to peace. We did that because it’s good, because it’s prudent, but above all because that’s what friends do. We weren’t playing the blame game, or the spin game, but instead continuing to walk with each other as we have done for many years now, offering comfort and support. As Earhart would put it, we thought and we acted with our air control stick pointed forward.

I said a lot has happened since our last Iftar Dinner here: our local response to the terrorist incidents was important. Another event of significance was the much-lauded visit of Pope Francis to Morocco. He was very well received. Asked on his way home by a French journalist what he thought the fruits of the visit might be,[1] the Holy Father responded that we should not speculate about the fruits so much, since they are often unseen or only come after some delay. Instead, he suggested, we should focus on the flowers blooming all around us, ‘beautiful flowers of coexistence’ which are the promises of fruits to come. ‘It is more beautiful to sow hope,’ he insisted, ‘to sow hope and walk hand in hand, always forward’ – with your stick forward, so to speak.

Doing this, we will indeed see fruits, and on the video we made for tonight I began to articulate four great fruits of our interfaith relationships that I have experienced personally. One is a greater sense of neighbourliness, of being happy living beside each other, ‘beautiful flowers of coexistence’. The second moves beyond ‘live and let live’ to friendship, and then a deepening of friendships, until we make each other’s good our own. A third is mutual enrichment, where we learn from the common ground we share as well as the differences, things about God, the world, each other, ourselves. And a fourth is joint action, as we feel increasingly comfortable collaborating for the common good.

Terrorist incidents, papal visits, a third event since our last Iftar Dinner together was the federal elections. In those elections people of faith – of different faiths – found they had common cause and thatseems to have affected some voting. Stephanie Borys on AM, Patrick Parkinson writing for the ABC Online, Anna Patty and Michael Kozoil in the Sydney Morning Herald, Jennine Khalik in Crikey.com, Miranda Devine in the Daily Telegraph and others all identified the place of religious faith in people’s recent voting decisions, especially in Western Sydney, parts of Queensland, and even in the People’s Republic of Melbourne. Several commented upon the importance of religious freedom for many electors, and the need for the major parties to re-engage religious voters.

In our response to terrorist incidents, to papal visits, and to contemporary politics, people of faith in this country keep demonstrating the good-will, neighbourliness, friendship and common purpose that withstands even threats and attacks. Thank God for that. In interfaith relations, let’s always think with the stick forward. جزاك اللُه خيرًا