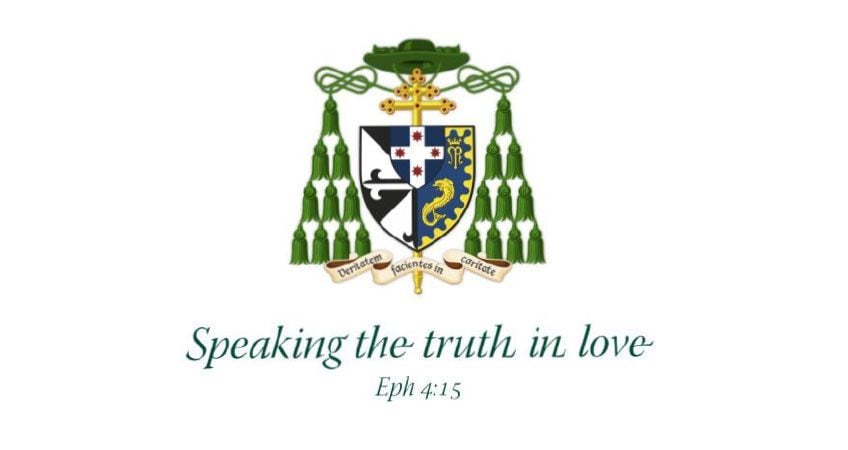 Address to the Anti-Slavery Ethical Sourcing Seminar and Expo

Welcome to St Mary’s Cathedral Hall to this Anti-Slavery Ethical Sourcing Seminar and Expo. As we honour past and present elders of the Gadigal People and the Eora Nation, we acknowledge that our history as a nation includes a shameful chapter in which many Indigenous people were stolen, trafficked or pressed into forced labour. We recognise the trauma and long-term impact of those injustices on individuals, families and communities.

Today I want to acknowledge and express my deep gratitude for the efforts of the Archdiocesan Anti-Slavery Taskforce, led by Hon. John McCarthy QC, with Executive Officer Alison Rahill and Executive Manager Jenny Stanger, who’ve worked tirelessly to further this urgent cause.

I acknowledge all those who will be speaking to us today, including Jennifer Westacott AO of the Business Council of Australia; Special Minister of State, Hon. Alex Hawke; Deputy Leader of the Federal Opposition, Hon. Tanya Plibersek and Moe Turaga, a survivor of modern slavery, as well as our several panellists. A warm welcome to representatives from Government and the Public Service; from various Church agencies; from the business sector, universities and community; and to all present this morning.  I also congratulate Professor Jennifer Burn on her appointment as the NSW Anti-Slavery Commissioner and wish her well in her mission. Professor Burn has been a member of my Archdiocesan Anti-Slavery Taskforce, and so I thank her for that work also.

Over 40 million people around the world today are victims of some form of slavery, thousands of them in Australia. That’s more than at any time in history and despite slavery being illegal almost everywhere. As Pope Francis reminds us in his message for St Bakita’s Day “although we try to ignore it, slavery is not something from other times.” Indeed, it is a more complex phenomenon than the chattel slavery of old, and includes slavery-like practices such as forced agricultural, industrial and domestic labour, sex slavery, child labour and human trafficking; those enslaved are often subject to physical and mental abuse. The sheer scale and complexity can overwhelm us: what, we might wonder, can any of us do about it?

We could, of course, drop whatever else we are doing and devote ourselves to helping the victims overseas or here in Australia. There are people in this hall today who are doing this and the rest of us are in admiration of them. But noble and necessary as their work is, most of us are not free to join it. And even if we were, we know that prevention would be so much better than cure. We need to eradicate modern slavery at its sources, and not merely deal with the victims of it as we can.

Fortunately that is something to which we can all contribute, even without giving up our day jobs. And that’s what today is about, joining in action with others working to help eradicate modern slavery in our generation by committing ourselves, amongst other things, to slavery-proofing our supply chains and implementing ethical purchasing practices.

The good news is: a lot of work has already been done on this, and I think it’s worth taking a moment to reflect on this. Today we profile a number of companies and organisations with a strong ethical character, some of which have been around for a good long while, determined to play their part. In my own church I think of the sterling work of ACRATH – Australian Catholic Religious Against Trafficking in Humans. There are also a growing number of businesses and community groups in Australia founded explicitly to include anti-slavery in their supply choices, educational efforts and lobbying campaigns.

Government is also part of the solution here. Since I formed the Archdiocese of Sydney Anti-Slavery Taskforce two years ago, it has helped me to join others in lobbying our federal and state governments to play their central role in this great cause. In the presence of Hon. Alex Hawke, the Hon. Tanya Plibersek and other representatives of our Federal and State parliaments and public services, I want to put on record the congratulations of the Archdiocese of Sydney and the Catholic people of Australia to both Governments, indeed both Parliaments, for enacting the Modern Slavery Act 2018 (Aus) and the Modern Slavery Act 2018 (NSW). These Acts now require public sector agencies, businesses and charities, including Churches, to report on efforts to address modern slavery in their supply chains. We might all suggest improvements to those laws, especially to the Commonwealth Act, but both represent real progress. I also want to pay tribute to the Hon. Paul Green MLC who was the originator and driving force behind the NSW Modern-Slavery Act, which I understand is one of the strongest in the world. Well done Paul!

Thirdly, my Archdiocesan Taskforce made its first report to me last year and I accepted recommendations that encompassed: an anti-slavery supply chain strategy for Catholic institutions with procurement functions; anti-slavery education and external engagement; and anti-slavery welfare services. Regarding the second of these, the Taskforce is preparing proposals for me on ways to raise awareness and educate the Catholic people and wider community on the reality of modern slavery and how they might help. Already some public education work has begun.

Fourthly, we now have strong support throughout the Archdiocese of Sydney, from church agencies, education and healthcare providers, and parish priests, to seek to remove the stain of slavery from our Archdiocesan procurement practices. Work continues apace in this respect. Today I am pleased to announce the commencement of Shop For Good – the Sydney Archdiocesan ethical purchasing project for Catholic schools, parishes and households.

This project enables our 134 parishes and their people to be actively part of the anti-slavery work of the Archdiocese. Between them they can make a significant contribution to keeping our money away from supply chains which may be tainted with slavery and forced labour.

The Shop for Good arrangements are straightforward. On the supply side there are presently four suppliers offering a range of products include Fairtrade tea, coffee, hot chocolate and a range of clothing, footwear, and sports equipment.

In all this, the Church of Sydney seeks to offer some national leadership and to walk its own talk and to assist others to do the same. Shop For Good will allow any other church, business, community group or individual access to our recommendations regarding ethical purchasing. I’m delighted by the number of suppliers who have already supported this initiative, and encourage everyone to join.

Fifthly, Pope Francis has declared the feast of St Josephine Bakhita, 8th February, a world day of prayer, reflection and action against human trafficking and slavery. St Josephine was herself a modern victim of slavery and is patron saint of this great cause.

Because slavery is not merely a commercial or social evil, but also a deeply moral and spiritual one, we today distribute a prayer card and I invite you all to join me in a St Josephine Bakhita’s Day Mass at 1:10pm in the cathedral. In this Archdiocese, the St Bakita prayer card has been distributed to tens of thousands of students and parishioners interceding for victims of modern slavery.

No doubt there is more the Church could be doing, as could government, businesses and community groups. The Archdiocesan anti-slavery strategy is in all respects a work in progress and it will take time before the new framework is embedded across the Archdiocese.

In today’s forum I hope to hear more practical suggestions about what can and must be done to combat slavery in homes, workplaces and communities in the future. But we’ve made a start. Between us we have very considerable purchasing power and therefore power to deter profiteering from modern slavery. This is no longer simply a moral-spiritual imperative, but a legal requirement now also; no longer merely a pipe-dream for the future, but an urgent call to respond now; no longer only lip-service to the issue of modern slavery and trafficking, but engagement in real action for real change.

Speaking of his experience of the World Youth Day in Panama just a fortnight ago, which I was privileged to attend with 220 young Sydneysiders, Pope Francis recalled how in the Stations of the Cross ‘the youth carried with Jesus and Mary the suffering of many brothers and sisters… especially those affected by forms of slavery.’[1] Today we are given a share of that burden and, indeed, an opportunity to relieve it for good.