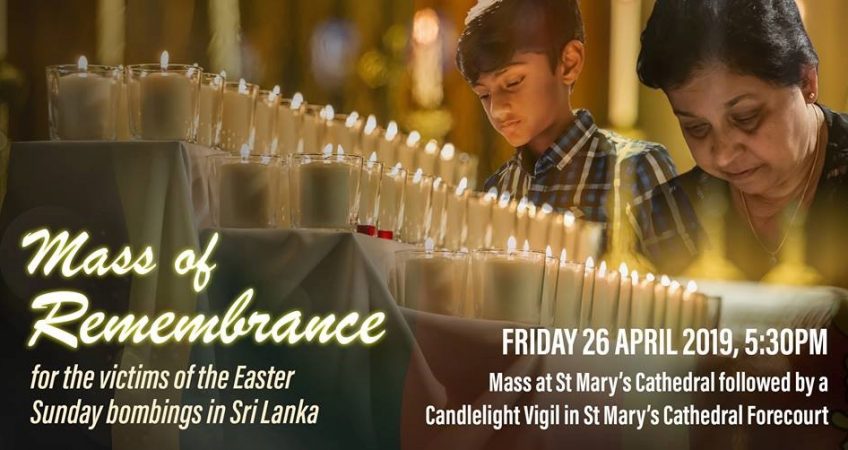 Thank you for attending our Mass and Candlelight Vigil. Tonight we have commended to Almighty God the 253 or so victims of the Easter Sunday bombings in Sri Lanka. We have prayed for healing for the hundreds of survivors who were injured and traumatized, and for consolation for the grieving. And we have interceded for peace and security for the Sri Lankan people, and indeed for people of every nation.

We are grateful to have had with us many of our religious, civic and consular officials, including Catholic bishops and priests, leaders or representatives of other faiths, the Consul-General for Sri Lanka and other Sri Lankan community leaders and members, the Foreign Minister and other federal and state ministers and their opposition counterparts; representatives of Multicultural NSW, NSW Police and NSW Ambulance; and other community leaders.

Tonight we recall the stories of the real people who were the victims of the Easter Sunday bombings. We mourn them as our brothers and sisters. We insist on our ancient wisdom that it is better to suffer evil than perpetrate it. We recognise that in eye-for-an-eye retaliation everyone ends up blind. We recommit Christianity to its mission in Sri Lanka and in the Sri Lankan community in Australia, to being a force for reconciliation, unity and peace.

As I said in the cathedral, I now repeat on the streets: suicide bombers blaspheme the holy name of God whose image their victims bear and who never condones violence against the innocent. They desecrate the bodies they kill, the ceremonies they interrupt, the holy places they damage. They maim and traumatize the survivors, their families and communities. And they add their own self-murder to the list of the atrocities that invite damnation.

There is no history of Muslim-Christian animosity in Sri Lanka or in the Sri Lankan-Australian community. We will resist with all our might the efforts of those who would manufacture such animus. Christians are friends to their Muslim neighbours in Sri Lanka and Australia, and that, we pray, will continue. We will continue to offer our schools, hospitals and welfare services to all comers, of whatever faith. We will continue to hold out the hand of friendship.

As Pope Francis said in Colombo in 2015: “Genuine worship of God bears fruit not in discrimination, hatred and violence, but in respect for the sacredness of life, respect for the dignity and freedom of others, and loving commitment to the welfare of all.” God bless you all.