ADDRESS TO THE CLERGY 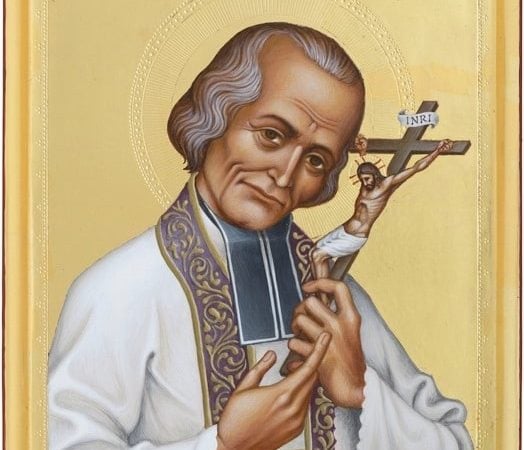 “There is little love of God in that parish; you will be the one to put it there.”[1] So advised the bishop who sent Fr Jean-Baptiste Vianney to Ars, a remote and neglected village of only 230 people. Visit every family in their home, the bishop advised, and do your best to give regular catechesis to the children. Jean did as he was asked, and more. He laboured for hours over his homilies and then preaching at a length that modern preachers can only dream of – and congregations have nightmares of. He knew he was dealing with ignorance, indifference and plain hostility to the Catholic Church and the Catholic faith. He was obstinate, also, in his battle against sin, making himself available for hours in the confessional, and denouncing blasphemy and other ills at every opportunity. He even rather hopelessly opposed lewd dancing and immodest dress.

Though life for 19th-century French country priests was rather simpler than life for us in 21st-century Sydney, there is still much in their stories that is rather familiar. France had been through a rather dark period of anti-clericalism and radical secularization from which it was far from clear it would ever emerge. Those labouring in the Lord’s vineyard could not presume the support of the surrounding culture or the interest of the average baptized Catholic. Like us, if they waited in their presbyteries for people to come to them, they were doomed to be disappointed: they had to find ways to reach out to people. Though their supposed ‘sexual revolution’ and revolution of values was rather tame by comparison to what we’ve witnessed in our time, the challenge of how to speak the truth in love is perennial. For priests there were and still are temptations to pride, laziness or despair, to courting popularity or seeking personal comfort. For people, there was an undercurrent of spiritual boredom and agitation which is bred by materialist cultures and these days seeks refuge not in the can-can so much as in endless accumulation of wealth and gadgets, endless consumption of fast food and entertainments, endless chatter through television or social media.

Not that all was bad then or is indeed now. There was renewal in the air whether or not the curés recognized it: 400 new congregations of religious sisters were founded in that period in France alone; missionary-minded Marists and others took the traditional faith of France as far as Oceania; and new ecclesial movements flourished, such as Bld Frédéric Ozanam’s St Vincent de Paul Society. The priestly vocation is no bed of roses, but nor is it always a crown of thorns. In his farewell discourse Jesus warns us that we will experience sorrow, but He quickly follows that up with the promise “but your sorrow will turn to joy” (Jn 16:16-20). As we heard in our readings last week, Paul is cast out of the Corinthian synagogue, yet his very next converts were “Crispus, the president of the synagogue, and his whole household” (Acts 18:1-8). Paul had his enemies in Corinth, but great friends also: Aquila and Priscilla, Silas and Timothy, Justus and Crispus, and his family. Indeed Luke records that “a great many Corinthians who heard him became believers and were baptised.”

The question is: how do we respond in our 21st century, with all our advantages and challenges? How do we, by our words and example, in our sufferings and our joys, win others to Christ? Commemorating the centenary of the death of Jean Vianney, Pope John XXIII issued his encyclical Sacerdotii Nostri Primordia in August 1959. In it the Holy Father identified dimensions of the life and ministry of the Curé of Ars that he thought of enduring significance for priests. In particular he thought the evangelical counsels, offered by Christ to all Christians not just to vowed religious, were particularly potent ways that Jean fostered friendship with Jesus and His people.

It has been said that religious vow poverty and diocesans live it – whether they like it or not! Well St Jean Vianney was voluntarily poor, giving away everything he could. He was chaste in all his dealings with others and a particular example to penitents in a highly sexualized culture. He humbled his own will to those with authority over him. These asceticisms, and others he embraced, enabled him to offer a genuine gift-of-self to his parishioners. And to these he added a foundation of prayerfulness. Jean spent hours in front of the tabernacle at night, nourishing his spiritual life on devotion to our Eucharistic Lord. John XXIII thought the Curé’s formula of daily meditation, visits to the Blessed Sacrament, recitation of the Rosary and examination of conscience were secrets of a happy and healthy priesthood. I hope and pray they are features of our lives too.

The triumph of grace in the lives of priests, their fidelity in service of God and his people, has been evident in the years of priesthood shared by today’s jubilarians. It is always a joy and a source of encouragement for me to join my brother priests, but a special joy to celebrate those who have given over their lives to the service of Christ and His Church. We give thanks to Almighty God for the gift of the priesthood and to these men for their fidelity and generosity as ‘icons of Christ’. Here tonight we celebrate 25 years of priesthood for Joseph Trong and Tadeusz Seremet SDS; 40 years for Isidore Anantharaj and Tom Carroll; a half-century for Phil Linder and Laurie Foote OP; and a whopping stretch (or stretcher) of 60 years for Paul Foley and Kevin O’Grady! Between them they represent Irish Australia, Vietnamese Australia, Belgian Australia, Polish Australia, Indian Australia, Hungarian Australia… the lot. And they have a combined priesthood of 350 years, going back well before the birth of St John Vianney. I think that service deserves thunderous applause!

Now we have received a communication from the Holy Father…