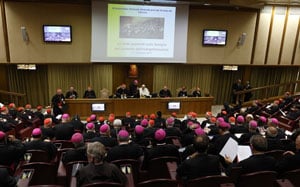 I think the biggest challenge to the family today is that people have forgotten how to love. That sounds odd, I know, but what I'm getting at is the cross-shaped Easter sort of loving rather than the heart-shaped Valentine's sort of loving. We are less and less willing to commit, for the long haul, to another person or a small community of persons, come what may, even when the loving is hard. We are less and less willing to engage in the self-sacrifice that requires, the compromising of our willfulness, even unto death.

The results are plain to see: in our grandparents' day nearly everyone got married; now fewer than half do. Of those who ever give marriage a try, it's generally only after a long period of experimentation and cohabitation, even though this reduces marital sticking power. And many don't stay married. Many adults think children are an optional extra and many children grow up without the experience of a Mum and Dad committed to each other and to them over the long haul. I think the big pastoral challenge is to teach people how to love again.

No Need to “reinvent” the family and marriage: 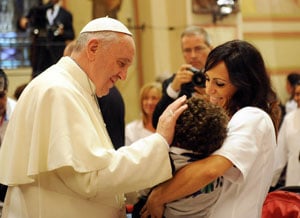 The “Gospel of Life and Love”, as St John Paul II called it, is the Church's received wisdom about family. It has a natural basis, reflects the experience of the faithful over twenty or thirty centuries, and is perfected in the teachings of Christ. On that view family is not just our play-thing, to remake as we like: it has its own inner logic.

Christians – and most other believers too – believe that for man and woman to join in marriage and be fruitful is at the heart of the original vocation of humanity. The family is also the vital cell of society, where we are raised and learn how to exercise our humanity. Family life is the context of so much that is good and necessary such as protection of life, promotion of health, early education, care of the elderly, transmission of faith and values, experience of love. There's no better place to learn reverence for the dignity of every person, self-sacrifice and commitment, how to be a man and a woman and ultimately another family… In places like contemporary Australia, where the family is under great pressure and often breaks down, it's little wonder that that sense of reverence and responsibility and consequent altruism are declining. Reinventing marriage and the family as something it isn't is not the solution to that: it's just another symptom.

The sex abuse crisis has damaged the Catholic Church, general Mass attendance has fallen however Catholic school enrolments are increasing: 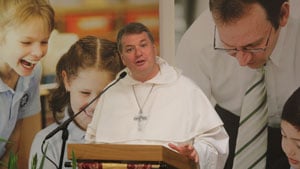 I think Catholic schools are booming because parents think they are good schools. That they teach Catholic faith and morals, however imperfectly, is not a “turn off” for people, even people who don't go to Church, even some who live at quite some disconnect from the Church. I suspect that deep down they think the Catholic ideals are worth passing on to a new generation, even if they are not much good at doing that themselves. Others embrace the Catholic thing more enthusiastically.

I agree that the sex abuse crisis has seriously damaged the moral authority of the Church, or at least of churchmen; it will be a long hard road to win back people's trust. Yet the very fact that so many of the converted, the unconverted and the diverted want Catholic education for their kids suggests there is a residual confidence that the Church has something good to offer.

No children at church on Sunday? Out in Western Sydney, where I've been of late, there are plenty. But I know that's not universal in Australia. We are falling back to the same poor rates of Mass attendance that we had 150 years ago in Australia. The ageing of the population isn't helping either.

The pastoral role of women: 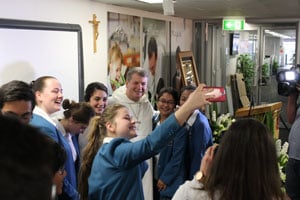 The role of women has changed so significantly in just a few generations and it's not just the Church that's playing catch up. Look at how governments twist and turn when it comes to paid parental leave, child-care and other ways of accommodating the career woman plus family woman goal. Look at how men are only gradually accommodating to sharing in the upbringing of children, in domestic duties etc.: some love it; some expect their wives to work long hours to pay the mortgage AND work long hours as the home-makers, all at once. Everyone knows two full-time jobs are very hard to manage at once.

It's not quite right, at least from a Catholic point of view, to say that the traditional role for women was as wives and mothers. That was one, overwhelmingly common, role. But we also had some very significant nuns and lay women, running major educational, healthcare and welfare institutions, even whole networks of such institutions. These were, in secular terms, powerful career women. I think of the Dominican lay-woman St Catherine of Siena who was probably the most significant person of her time, yet she was not married and not a nun. She was young and clever and charismatic and determined to mark a difference, and she did. So there was space for other ways of being a woman in the Christian tradition. What is different now is that the same woman wants the career and the family and maybe at the same time.

The Catholic faith is more than just sex and life issues:

Catholics faith is more important than morals, in the sense that it is prior to and informs all our active life; and morals is a lot more than sex and life issues (there's the ethics of business, media, truth-telling, confidence-keeping, religious practice, the arts, friendship, war, ecology, leisure, sport, politics, social justice…). It is distorting if you pick just one area and neglect the others.

I suspect partly it is a matter of perceptions (often media-generated, I dare say): people think the Church is always banging on about these things when in fact, of course, the Church far more often speaks about social justice issues than it does about sexual morality.